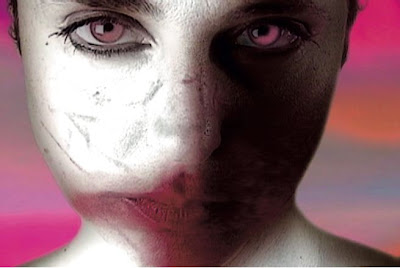 I was recently asked by Girrlsound to sit down with myself and have a conversation about a recent project of mine.

"Ether and the Voice: an electronic media opera" is a hybrid performance, video and interactive installation work which premiered at the New York State College of Ceramics at Alfred University, Alfred, NY in March 2010. The work was the culmination of a two year investigation in which I explored the phenomena of the voice, identity, and electronic processes. 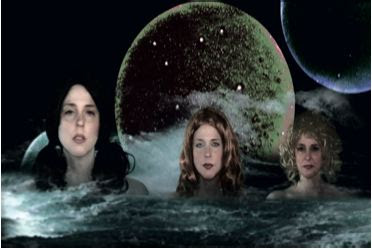 At first I was apprehensive about the the concept of a self interview, but as I mulled it over the many voices and characters that inhabit my interior sprang forward eager to facilitate the process. The Dreamer, The Vegan, and The Blonde are three characters I created for the opera and serve as the opera's chorus and narrators. They represent the psyche of Ether (the main character) and speak solely through large video projections and sonnet style poetry. The "girls" as I refer to them, speak directly to the audience and critique Ether's journey as she traverses through three distinct environments which are represented by Acts 1, 2 and 3. Here they have graciously taken on the role of interviewer.
The Dreamer: Why did you cweate an opwah and what was your pwocess wike?
Colleen: Well, I didn't set out to create an opera. It really just evolved from the process of creating individual works that happened to possess recurring themes and threads of connection between them. I resisted calling it an opera for some time, but gradually I got used to the idea and then really embraced it. There is something about the excess and opulence of opera that is exciting to me. Some of the feminist theory I was reading at the time discussed the notion of female excess and the idea that woman with all her emotion, sexual power, and hysteria was just too much, the spill over of woman was seen as something that needed to be contained and dominated... for her own good. This is where the archetypal siren enters the scene. Hers is a "voice that is invisible and monstrous". The power of the siren's voice for evil and death is a story that has been told time and again. In my story the sirens assist Ether in her quest to recover the voice.

My intention was to create a multi-media performance work that pushed personal, artistic and conceptual boundaries. I'm interested in integrating different mediums: video art, music, sound, installation and interactive video instruments.  I wanted to create a work that not only integrated mediums but also fused different literary, sonic, visual, and musical genres. This is something that I have experimented with in the past and really liked the results. For instance, a rock song can live next to an experimental sound work, a theatrical monologue, prose and sonnet styles of poetry. In the same vein, I wanted the performance to take a multitude of shapes: video projection, live performance, and vocal performance. For whatever reason I am compelled to throw everything in the pot and see what becomes of it. In my mind anything and everything is fair game. For me there are no boundaries when it comes to mediums, genres and the creative process.
The Dreamer: What do you think wies behind the impulse to merge these diffewent ewements?
Colleen: I think Ether (the main character) says it best in the first act of the opera when she declares "It's all a mosh of information and sensation".  For me that line is a strong summation of how I experience the over saturation of visual information and electronic processes and modes of communication. Everything starts to merge, it all lives on the same plane and we are all accessing that plane and forming our own ideas, perceptions and fantasies about it. I think my creative process reflects that phenomena. "Integration and Interdisciplinary" are such key words in technology and arts. How many elements can be integrated? Where do we draw the line? As artists does there even need to be a line? I know there are many artists who believe in definitive boundaries when approaching different mediums and genres of work. The frame in which I work from is quite porous. I am simultaneously drawing from multiple sources of information and referencing seemingly disparate genres of expression. It may be that this is just how my brain is wired. It's really not a conscious and calculated effort. The creative process has a mind and order of its own.
The work becomes an alternate reality constructed by Ether's psycho-techno-social experiences. It explores the psychic, subconscious and fantastical realms of Ether's psyche. We get to see how she is dealing with the dynamics of living at the crux where culture, body and technology intersect.


In the prose monologue "the L's the I's the P's" Ether expresses her frustration with texting and emailing. There's an absence of physical voice and emotion in those forms of communication. She says "Don't misinterpret the text, it's static, the breath just hangs, it waits at the end of an exhale gathering strength, a foreign body in foreign lands". This introduces the concept of the disembodied voice. The separation of the voice from language, voice from text, and voice from body through electronic processes. Here is where the voice escapes and starts to roam on it's own, hence the name of the name of Act 1 "Extreme Roamer". Ether embarks on a journey to retrieve the disembodied voice and that's how the whole story begins. 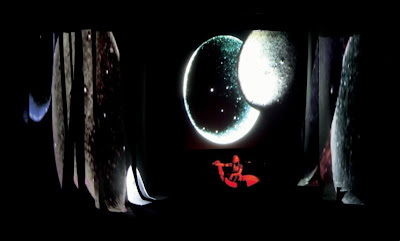 (The name of the first act comes from an actual experience I had with my mobile phone carrier. I was traveling overseas when a representative from Tmobile called me on my mobile phone and accused me of being an "Extreme Roamer". When I returned home I had received a letter stating they were dropping my contract due to my "Extreme Roaming". What this really meant was they were having to pay AT&T roaming charges because they did not have a cell tower in the remote area I lived in at the time.) 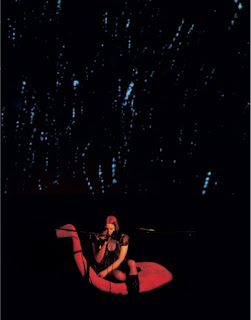 The Vegan: In what ways do you think this work challenges traditional notions about performance?
Colleen: I believe performance can live in multiple spaces and exist simultaneously through multiple mediums. With this work I really feel like I am poking a stick at all these different areas and seeing what kind of reaction I might get from the audience and the mediums them- selves. The first act consists of a prose piece that is recited in theatrical/monologue form, the twist is that my voice is triggering an interference signal through an interactive interface - this interference disturbs the visual and sonic environment.

The first act “Extreme Roamer” is predominately cinematic with several composed sound works. The second act “A Boat, A Home, A Future” is a collection of songs and scenic video projections, while the third act “ The Bright Side” breaks that fourth wall and spell of theatrical and cinematic illusion by inviting the audience on stage for the improvised “Somewhere Above the Sky” number. In this number I control the electronic signal with my interactive video instrument, the “Crystal Ball Magic Box”. 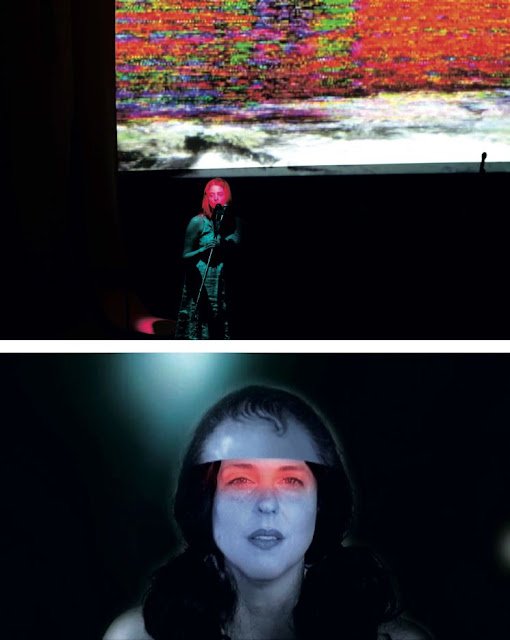 The third act is an improvisation and my favorite because it can be reinvented every time the opera is performed. To answer your question, I think the work starts to blur the lines dividing these different genres, mediums and electronic processes. At the end of the day I am telling a story, but the story as well as the process is about the influence of technology impacting outmoded structures, whether they be psychological, social, artistic, theoretical or physical. Technology facilitates a cycle of destruction and creation. What it creates and destroys is sometimes good, sometimes bad depending on your point of view.

The Vegan: Can you tell us a bit more about the “Crystal Ball Magic Box”?

Colleen: The Crystal Ball Magic Box is an interactive video instrument I designed for the opera’s third act. I wanted to create something that was a playable video controller/instrument. I’m a songwriter and I’ve played in rock bands in the past, I am used to having an instrument with me on stage. I love the idea of live processing and manipulating video and sound through an interesting looking object. It’s not just knobs and dials being turned, the sculptural aspect of the piece adds a bit of drama and stage presence. The solid glass spheres were created in the glass studio at NYSCC/Alfred University. The wooden box houses an arduino interface which is connected to a computer and Max/MSP Jitter patch. When I turn the crystal balls I am manipulating the video signal. I am interested in creating more of these kinds of instruments and getting others to play with me.

The Vegan: Why is the voice so important to you?
Colleen: The voice is what started this whole journey. The voice, sound, and music, resonate in a similiar way for me. The voice is a vibratory and sonic manifestation of human emotion and communication. The voice allows us to con- nect more deeply to one another and identify with each other’s joy, pain, rage, sorrow, excitement, fear etc. I think I am also drawn to it’s multiplicity of meaning, it’s symbology and it’s multi-dimensionality. The voice is the great storyteller, the carrier of myths, and histories. I also like the idea that voice allows anyone or anything to speak.

The Dreamer: What would you wike to see hap- pen with this work? Will it evolve?
Colleen: My next goal for the opera is to translate it into a single channel work. This will take some re-working. I had presented the opera as a multi channel video installation shortly after the premiere of the live performance. I am interested in revisiting that form of presentation again. Ideally I would like to create a video opera house. The idea is that the audience would physically move through different environments and experience the opera through a series of interactive installations.

The Vegan: What do you require for that to happen?

The Vegan: What are you working on now?
Colleen: Currently I am an artist in residence at the Cite’ Internationale des Arts in Paris, France. I was awarded a fellowship/residency by the New York Sate College of Ceramics at Alfred University in Alfred NY which is where I received my MFA in Electronic Integrated Arts. I am experimenting with some hand drawn animations at present and I am hoping to combine these animations with other time based media. I am thinking of different ways to present the material -beyond the traditional screening type spaces. It’s in a very experimental stage at this point. I am also launching an Experimental Time Arts festival - the first screening will take place in Paris, France Octo- ber 2011. 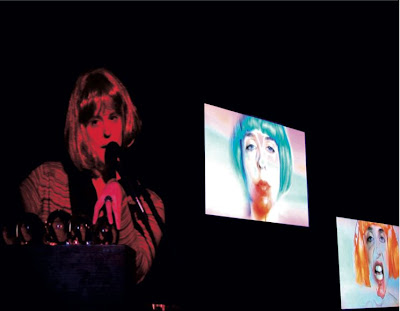 The Blonde: (husky voice) Do you have any regrets? 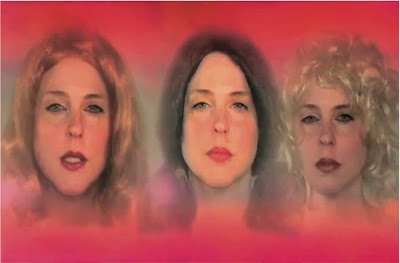 For more info on Colleen and her work please visit: www.colleenkeough.com


Link to video excerpts and documentation of “Ether and the Voice: an electronic media opera”.